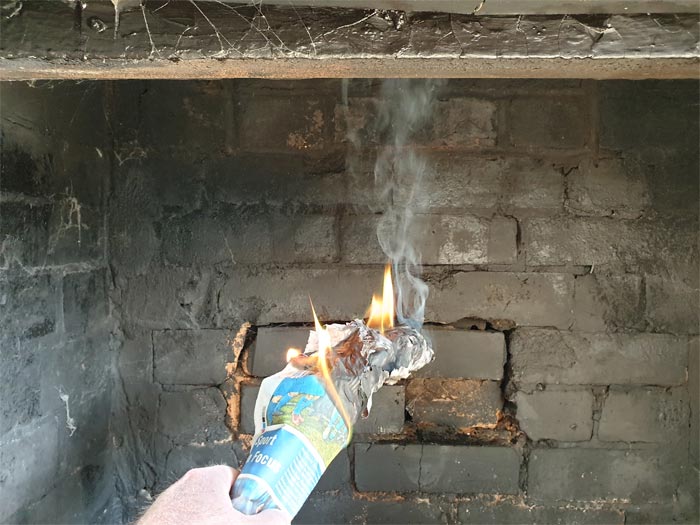 Insufficient draw on a fireplace from a chimney can lead to a number of issues when having a fire, including not being able to start the fire without it going out, more smoke being produced than usual, or finding it harder to maintain the fire.

Every fireplace is different. The size of the fireplace, the height of the chimney, the diameter of the flue, and other factors can all contribute to how well a chimney draws on a fireplace.

The draft plays an important part of having a fire in your home. We’ve explained how a fireplace works in more detail here, but the movement of air up the chimney (known as the draft) helps to remove any waste gases or smoke from a fire by pulling it out of your home. This movement of hot air up the chimney creates a pressure difference that in turn helps to pull fresh air into the fireplace from the room. This cycle provides a fire with a constant supply of oxygen to help keep it going.

Changing anything structural to your fireplace or chimney in order to help improve the draft can be time consuming and very expensive.

That’s why we’ve put together the complete list of things you can do right now that will help to improve the draft, and in turn help you to have more successful and hotter fires in your open fireplace.

1. Have The Chimney Swept

If you haven’t had your chimney swept within the last year then it’s important to have your chimney cleaned so that it can operate as efficiently as possible.

It’s recommended to have your chimney swept at least once per year, ideally before your burning season, but may be required to be cleaned more often than annually if you’re regularly burning wood in your fireplace throughout the year.

Through use of your fireplace, a tar-like substance known as creosote can build up in your chimney over time. Creosote and other materials can line in the inside of your chimney, reducing its effective diameter and therefore potentially reducing its ability to remove waste air from your home.

Even if you haven’t used your fireplace within the last year it’s still a good idea to get your chimney swept. Debris can gather further up the chimney, and birds can even nest.

Having your chimney swept as regularly as possible is one of the main ways you can help to improve how well your chimney is drawing on your fireplace.

2. Open Any Air Vents Or Windows

The issue of a vacuum being created can be more of a problem in newer homes, where they are built to higher standards and less air will naturally make its way into a house.

Opening any external air vents located in the same room as your open fireplace will help to supply a fire with as much fresh air as possible.

If your home doesn’t have an external air vent you can also crack open a window slightly, ideally one that is located in the same room as the fireplace.

By providing a fire in an open fireplace with a source of continuous fresh air from outside your home, it can help to maximize the draft on your fireplace. Opening any vents or windows can also help to prevent a fireplace from pulling warmer air out of other parts of your home.

In order to help improve the draft as much as possible, If your fireplace has a damper it should be fully opened prior to starting any fire.

A fireplace damper is typically located within the lower area of a chimney, just above the fireplace.

A damper is essentially a plate that helps to prevent heat loss from a home when the fireplace isn’t in use, but must be opened before any fires can be started otherwise smoke and waste gases won’t be able to leave the fireplace.

Dampers are typically controlled by a handle, which in many cases can be used to set the damper at a partially open position. Other types of damper can be found at the top of the chimney, in which case there would be chain hanging down into the fireplace opening.

Setting a damper partially open can help to reduce the draw on a fireplace, and so to improve the draft the damper must be opened as wide as possible.

For more information about dampers we have another article explaining them in much more detail here.

If your fireplace has glass doors, try to leave them open for a short period of time before each fire to help bring both the fireplace and the chimney closer to room temperature.

Glass doors can work much like a damper in that they help to prevent the loss of air from your home when a fireplace isn’t being used.

A fireplace with closed glass doors means that the fireplace can be cut off from the warmer room temperatures of your home. This can lead to a  fireplace that is much colder than the temperature of the room it’s located in.

To help overcome the issue of a fireplace and chimney that’s too cold, it can be beneficial to leave the doors to the fireplace open for a period of time before each fire.

This can help bring up the temperature within the fireplace and make it easier for the draft to be started.

Warming up the air within a chimney, also known as priming the chimney, can help start the draft even before a fire has been started.

Cold air trapped within a chimney can prevent waste air from a fire from leaving the fireplace properly, which in turn can prevent a fire from not receiving the fresh air that’s required to keep it burning.

To help improve the draw on our open fireplace, we always warm up the chimney before each fire.

As we use newspaper as our fire starter, we simply take another sheet of newspaper, roll it up and light it at end, place it within the top area of our fireplace and leave it to burn through.

If smoke from the newspaper is being sucked up the chimney then it’s a sign that the chimney is drawing well enough on the fireplace to be able to start a fire.

You can also leave a couple of solid firelighters to burn through on their own in your fireplace if you don’t have any newspaper.

By warming up the air within the chimney before starting a fire, it can give the fire a better chance of success. With the draft already started, the process of waste gases and smoke leaving the fire, and fresh air being sucked into the fire, can help a fire to get going as quickly as possible.

For our complete guide to warming up a chimney before a fire click here.

The top-down method of building a fire in an open fireplace simply reverses the way traditional fires can be built.

Where the logs can traditionally be laid at the top of the fire, when using the top-down fire method the logs are placed in the fireplace first. Kindling and the fire starter are then added on top the logs respectively.

In the case of trying to improve the draw on a fireplace, the main benefit of building a fire using the top-down method is that the fire is started at the top.

By being able to light it at the top of the fire, the flames are concentrated further towards the top of the fireplace. This allows all of the initial heat generated by the fire to be used to warm up the air within the chimney, and help start the draft.

In a traditionally built fire, the fire is started at the bottom of the fireplace. The fire starter will have kindling and logs laid on top of it, meaning that the heat needed to start the draft may not be produced until later into the fire.

To build a fire using the top-down method:

We’ve covered building a fire in a fireplace using the top-down method in much more detail here, and explained all of the other benefits a top-down fire has over a conventionally built fire.

To help improve the draw on your fireplace, it’s important to only burn dry wood that’s low in moisture content.

Wet wood is harder to burn because the excess moisture content needs to be burnt off before the wood can be properly combusted. As a result, it can be harder to start the draft on a fireplace when burning wet wood because less heat is initially being produced.

To ensure that the fire gets going as quickly as possible, and to help start the draft as soon as possible into to a fire, be sure to only burn wood that is lower than 20% in moisture content. The Chimney Safety Institute of America recommends that firewood should be between 15 and 20% moisture content to burn the most efficiently.

You can measure the moisture content of your wood accurately by using a moisture meter.

A moisture meter is an essential tool for any fireplace. If you don’t already have one then we highly recommend checking out our favorite moisture meter here.

If you’re in the UK you can find the moisture meter we use here.

The aim at the start of any fire is to get it going as quickly as possible so that there’s less chance of the fire going out. A smaller fire can get going much more quickly than a larger sized one.

When it comes to starting the draft on your fireplace as soon as possible, building smaller fires can lead to a fire that’s producing more heat sooner after being lit.

Even though our fireplace is fairly large in size, we don’t build fires that are too big. We can always add more wood once the fire has got going and there is sufficient draw on the fireplace from the chimney to sustain a long and successful fire.

9. Use A Fireplace Grate

To help improve the draw on our fireplace as soon as possible into a fire, we always burn our fires inside a fireplace grate.

A grate helps to lift the fire further off the base of the fireplace. When combined with a fire that’s built using the top-down method, this allows the fire to be as close to the top of the fireplace as possible.

Starting a fire as high up into the fireplace as possible helps to ensure that as much heat as possible is being used to heat the air within the chimney soon into a fire, and to help improve the draw on your fireplace.

10. Burn The Fire Towards The Back Of The Fireplace

To help improve the draft, building and lighting fires more towards the back of your fireplace can help to maximize the amount of heat generated by the fire that’s being used to warm up the air within the chimney.

11. Don’t Use Your Fireplace In Windy Weather

Windy weather can force air back down the chimney, known as a backdraft.

A fire in an open fireplace can struggle during windy weather because the draw on the fireplace needed to sustain a fire can be fighting against a backdraft.

How To Get More Heat From Your Open Fireplace

How To Keep A Fire In A Fireplace Going