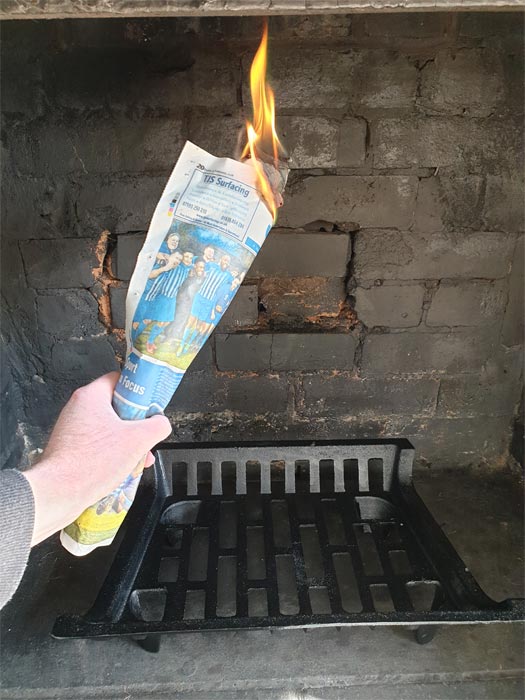 Cold air trapped within a chimney can lead to a fire in an open fireplace that keeps going out as a result of poor draft.

Warming up the air within the chimney flue can help start the draft on the fireplace, and aid in having a more successful and hotter fire.

So how can you warm up a fireplace chimney?

To warm a fireplace chimney flue, take a rolled up piece of newspaper, light it at one end, place it under the chimney within the top area of your open fireplace, and leave the newspaper to burn through. If you can see smoke disappearing up the chimney it’s a good sign that there’s enough draw on the fireplace to start a fire.

We’ve explained the process of warming up a chimney in further detail below, including why you should heat up a chimney before starting a fire, and other methods you can try to help start the draft.

Why Warm Up A Chimney?

A fireplace has direct access to the outside atmosphere, and so while a fireplace isn’t in use the temperature of the air within the chimney can be as cold as the outside air.

Closing a fireplace damper can prevent heat loss from a home when the fireplace isn’t in use, but can also lead to cold air being trapped within the chimney. Glass doors on a fireplace can also trap cold air within a fireplace and chimney.

We’ve explained how a fireplace and chimney works in greater detail in another one of our articles here.

To have a successful fire in an open fireplace, there must be sufficient draw from the chimney on the fireplace to be able to sustain the movement of hot and cold air. Trapped cold air within a fireplace and chimney can lead to no movement of air, and therefore no draft.

It can harder to start a fire in an open fireplace when a chimney is filled with cooler air.

If there’s no movement of air up the chimney, waste gases and smoke can struggle to leave the fireplace. This in turn can prevent fresh air from being sucked into the fireplace to feed the fire.

The warm air generated by the fire will need to be sufficient enough to start the draft, but in some cases this may not be enough to warm up the air within the chimney before the fire goes out.

To help start the draft, the air within the chimney can be warmed up through a process known as priming the chimney or flue.

By warming up the chimney flue prior to starting a fire, you can help to ensure that there’s enough draw on the fireplace that will help to get a fire going as quickly as possible once it’s been lit.

How To Warm Up A Chimney

There are a few methods that can be used to help warm a chimney, and these methods involve either warming up the chimney before starting a fire, or building a fire in such a way that it helps to start the draft as soon as the fire is lit.

Warm The Chimney Before Starting A Fire

There are a couple of ways you can use to help warm up the air within the chimney before starting a fire.

We use newspaper as the fire starter when building our fires, so we like to heat up the chimney using another spare sheet of newspaper.

The newspaper will usually produce small amounts of smoke as it’s burning. If you can see the smoke from the newspaper rising up the chimney then it’s a sign that the draft has started and you shouldn’t have any major problems with draw on your fireplace when lighting a fire.

Another method for warming a chimney includes placing a couple of firelighters by themselves in your fireplace and leaving them to completely burn through.

You can also use a hairdryer or candles to help warm up the air in your chimney if you don’t have any form of fire starter.

If you struggle getting sufficient draw on your fireplace even when warming the flue beforehand, then you can try building a fire that helps to warm up the air within the chimney as soon as the fire gets going.

To help warm the flue and start the draft, you’ll need to build a fire in a particular way by using what’s known as the top-down fire method.

A top-down method differs from a traditionally built fire because the process of building the fire is reversed. In a top-down fire, the logs are placed at the base of the fireplace, and the kindling and fire starter are added on top of the logs respectively.

One of the main benefits of building a top-down fire is that the fire is started at the top of the fireplace, rather than at the bottom.

In a conventionally built fire, the fire starter (such as newspaper) is placed at the base of the fire. When lit, the fire can struggle because it’s being smothered by the kindling and logs located on top. A traditionally build fire can therefore be less able at warming up the chimney until later into the fire.

To start a top-down fire:

For more information read our complete in-depth guide to starting a top-down fire in a fireplace here.

The top-down method can be used in conjunction with warming the chimney before starting a fire, or can be used on it’s own. As each fireplace is different you’ll need to see whether building and lighting a top-down fire is sufficient enough to start the draft.

If the above methods, including preheating the air in the chimney or building top-down fires, aren’t sufficient enough to start the draft on your open fireplace then there may be another issue.

A dirty of blocked chimney can reduce the draft potential of a chimney.

It’s important to have your chimney swept at least once per year in line with Association recommendations. It’s preferable to clean a chimney prior to the burning season, but a chimney should be swept more often than annually if you’re regularly burning wood in your home.

Burning hardwoods over softwood helps to reduce the amount of creosote (tar) being produced by fires, and therefore reducing the rate at which it builds up within the chimney.

If your fireplace has a damper, ensure that it’s fully open before starting any fires. A closed or partially closed damper will completely restrict or significantly restrict the airflow up the chimney. For more information, we’ve put together a complete guide to fireplace dampers in another article here.

A fire needs fresh air as well as fuel to survive. Open any external air vents within the room, or open a window to help feed the fire as much oxygen as possible.

Finally, ensure that you’re only burning dry wood. Wet wood will struggle to catch alight and burn, and can produce less heat as result.

We’ve explained the complete list of ways you can use to try and help improve the draw on your fireplace in another article here.

How To Build And Light A Fireplace Fire

What Moisture Content Firewood Should Be And How To Check

Ways To Help Improve the Draw On Your Fireplace