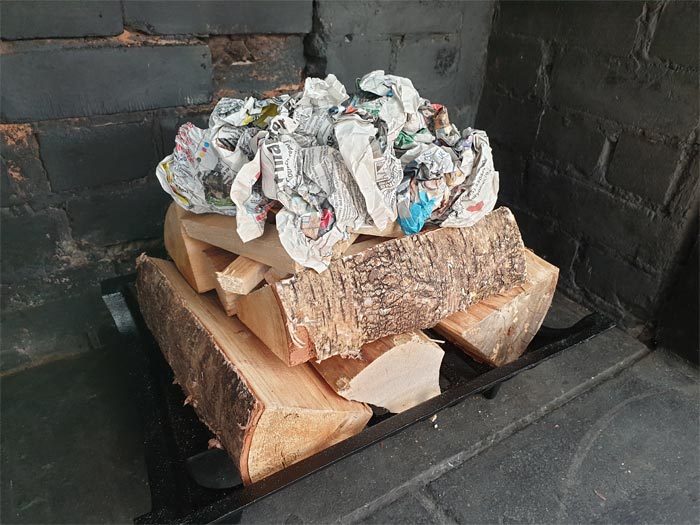 The traditional method for lighting a fire in a fireplace can be thought of as building the fire up from the base starting with the newspaper and laying the kindling and logs on top respectively.

The ‘top-down fire method’ reverses these principles of building a fire and provides a number of added benefits over the traditional method.

To start a fire in a fireplace using the top-down method:

This guide explains how to use the top-down method to build a long lasting fire in a fireplace, including:

What Is A Top-Down Fire?

A top-down fire is a way to build a fire in your fireplace that breaks the conventional method of building a fire from the bottom upwards using newspaper, kindling and logs respectively.

The traditional way to build a fire can be to lay a bed of crunched up newspaper at the bed of the fireplace, before adding a layer of kindling on top of the newspaper, and in turn placing a couple of logs on top of the kindling.

A conventional fire is typically lit at the base of the fire where the newspaper or other form of fire starter is located, and the flames spread upwards as the fire catches hold of the kindling and the logs. As the newspaper and kindling burn through, the logs fall to the base of the fireplace, and progressively larger logs are added on top throughout the fire to keep it going.

We’ve explained in more detail the whole process of building and lighting a fire in a fireplace in the more traditional way here.

A large benefit of using the top-down method is that larger sized logs can be added at the start of the fire, rather than needing to use only smaller sized logs in a conventionally built fire.

Larger sized logs have a greater surface area and so can typically be harder to catch alight early into a fire. Large logs shouldn’t be used too early into to conventional fire because they can potentially smother the fire and cause it to go out. Smaller sized logs are therefore preferred when building a traditional fire.

With the top-down method, the largest sized logs can be added to the fireplace right from the start. They can be placed at the base of the fireplace, with smaller logs laid on top.

The top-down method therefore allows a freshly lit fire to last for a much longer period of time before further logs need to be added.

A top-down fire works just as well as a conventional fire because the heat from the fire is transferred in all directions. The proximity of the newspaper to the kindling, and the kindling to the logs, allows for the top-down down method to work just as well as, if not even better, than a traditionally built fire.

Furthermore, if you struggle with draft issues in your fireplace or you’re looking for ways on how to start a fire in a fireplace without producing too much smoke, the top-down method may be the type of fire you should be building in your open fireplace.

The top-down method helps to reduce the potential for the fire to generate a lot of smoke because the fire isn’t being smothered by large bits of wood on top. A freely burning flame at the start of a top-down fire can burn the wood more efficiently and lead to a cleaner burn.

Lighting the fire at the top can also help to warm up the flue faster than a conventionally built fire, and in turn help to reduce any issues with draft at the start of a fire.

Benefits Of A Top-Down Fire

A downside of using the top-down fire method is that the fire can typically take longer to build compared to a conventionally built fire, because more wood needs to be added and stacked.

How To Build A Top-Down Fire

A top-down fire requires the same tools and materials as a conventional fire, but organized in your fireplace in a different way.

Before building your fire you should ensure that any wood you’re using is dry enough. As with all fires, the wood needs to be properly seasoned or dried for it to catch alight and burn efficiently.

Burning wet wood can inhibit the fire from getting going. Wood that is too high in moisture content will be harder to catch alight, harder to burn and can produce a more smoke than usual. Burning wet wood will therefore reduce the overall heat output from your fireplace, and lead to a fire that can have a number of issues keeping going.

The recommended moisture content for firewood is between 15% and 20%.

You can accurately check the moisture content of your wood before burning it by using a moisture meter. Because burning wet wood can cause so many problems, a moisture meter is an essential bit of kit for any fireplace, and can save you from experiencing numerous issues with your fireplace over the years.

See our recommended moisture meter over on Amazon here.

If you’re in the UK you can find the moisture meter we use over on Amazon here.

As an example, we checked the moisture content of a bag of kiln dried kindling we had recently bought.

The moisture levels of the kindling were around 10%, and so we knew that they’d burn very well in a fire.

As an example, we checked each log from a bag of kiln dried hardwood logs and the moisture meter showed that all of the logs had less than 6.8% moisture content (the lowest reading on our moisture meter).

If you’re finding that your logs are reading a moisture content of above 20% then it’s well worth leaving them to season for a while longer, to help ensure that they’ll burn efficiently when used in a fire. For more information on how we dry out our own logs click here.

Another one of our articles explains moisture content of firewood and how to check it in more detail here.

In contrary to how traditional fires can be built in a fireplace, the largest sized logs can be used straight away in a top-down method fire.

Larger pieces of wood with greater surface area can be harder to catch alight early into a fire when temperatures are relatively low. Building a traditional fire with larger logs can cause the fire to be smothered.

To start off building a top-down method fire, place your larger sized logs at the base of the fireplace or at the base of the grate. It’s important that the logs are packed together tightly horizontally so that they can transfer the heat between each other.

To help the fire burn for even longer and hotter, be sure to use hardwood logs rather than softwood for the bottom layer of logs in a top-down fire.

The Chimney Safety Institute of America (CSIA) recommends that the bottom layer of logs are laid with the ends facing the front of the fireplace, to allow to air to mix with the fuel better.

On top of the base layer of logs you should add another layer of logs, but of smaller size. As smaller logs are easier to catch alight than larger ones, this layer helps to transfer the fire to the larger logs below from the kindling above.

Adding smaller logs on top at a perpendicular angle to the logs below helps to allow for sufficient airflow through the logs. The smaller sized logs also need to be packed together tightly horizontally.

The kindling can then added to the fire on top of the smaller layer of logs.

It’s best to arrange the kindling in a crisscross formation so that air can get in between the bits of wood for improved burning.

The CSIA recommends that the smaller logs and kindling should be stacked so that the fire reaches around half the height of the fireplace. The fire should also not be built any higher than the top of the fireplace opening.

You may prefer to use softwood kindling over hardwood as it can catch alight and burn more quickly, which is important at the start of any fire.

To finish building a top-down fire, take single sheets of newspaper and crunch them up into balls. Don’t over tighten the newspaper balls as we still want to allow air to get in between.

Add the newspaper balls to the fire on top of the kindling.

The Chimney Safety Institute of America states that the instead of using newspaper, progressively smaller pieces of kindling can be added on top of the fire until it’s topped with simple wood shavings. Importantly, this kindling must be small enough and dry enough to ignite easily.

How To Light A Top Down Fire

With a top-down fire built in your fireplace, a few things should be checked before lighting the fire.

A damper will most likely be located within the throat of the chimney, just above the fireplace. Look for a metal plate with a handle, and use the handle to open the damper.

If you have a top-mounted damper that’s located at the top of your chimney then you’ll have a metal chain that hangs down into the fireplace.

For more information we have a complete guide to fireplace dampers here.

If there’s an external air vent located in the same room as the fireplace be sure to open it before lighting a fire. A fire needs a constant supply of fresh oxygen to keep burning, and this supply is critical during the early stages of a fire.

We simply slide our external air vent open before each fire.

This can help the fire to draw more air from outside your house, rather than drawing air from other areas of your home.

Lighting A Top Down Fire

As with lighting traditionally build fires, the newspaper should be lit using matches to start the fire. In a top-down fire, the newspaper or other form of fire starter will be located at the top of the fire.

We like to use long matches because we can reach the newspaper at the back of the fire while keeping our hands further away from the already lit areas.

A top-down fire should be lit at the top of the fire.

You’ll want to light the newspaper in several locations across the fire, ensuring that you’re coving each corner at both the front and back of the fire.

The aim when starting a fire is to get it going as quickly as possible.

Lighting more areas of the fire can help spread the fire to the kindling more quickly and evenly. A fire that gets going quickly can reduce the chance of any issues occurring, such as going out before any of the wood has caught alight.

Once the fire has been lit the screen/guard should be placed back in front of the fire.

One of the main benefits of building a top-down fire in your open fireplace over a conventionally built fire is that it can burn for a much longer period of time before any further logs need to be added to the fire.

Depending on the size of the fire and the type of logs being burnt, you can expect a top-down fire to last a number of hours before needing to add any further logs.

How To Build And Light A Fire (The Traditional Method)

What Moisture Content Firewood Should Be And How To Check

Hi, I’m James, I’ve been using traditional open fireplaces and wood burning stoves for many years, and I’ve also recently bought a pellet stove. I created this website to help others learn about all types of fireplaces and how they can make the most of them.