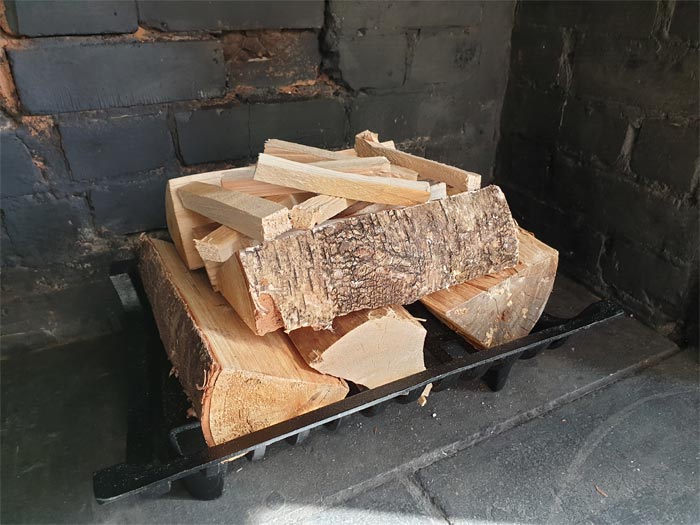 An important aspect of building fires in any open fireplace is stacking wood in a way that helps to maximize the airflow through the wood, while also ensuring that the wood is close enough to be able to transfer the heat and flames between each other.

Wood that is too tightly packed together at the start of a fire can prevent sufficient airflow through the wood, potentially leading to a fire that goes out due to lack of oxygen.

On the other hand stacking wood in a fireplace too far away from each other can prevent the fire from spreading effectively.

To stack wood in a fireplace:

The way that wood needs to be stacked in a fireplace can also depend on which type of fire you’re building.

We’ve explained below the two mains types of fire you can build in your fireplace and how you should be stacking wood for each of the types of fire.

How To Stack Wood In A Fireplace

A fire needs both oxygen and a source of fuel to survive. To be able to get a fire going as quickly as possible in a fireplace, the fire needs to be able to spread to all of the initial bits of wood while also receiving enough fresh air to continue burning.

Wood therefore needs to be stacked in a way that’s allows for the fire to spread quickly to other pieces of wood, while ensuring that the fire can receive sufficient oxygen to keep the process going.

There are two main methods of building a fire in a fireplace, both of which have their own ways in which the wood needs to be stacked.

The two main methods of starting a fire in fireplace are:

These two ways of building fireplace fires use the same materials (fire starter, kindling and logs) but order them differently within the fireplace.

The methods of stacking wood in each type of fire are explained below.

How To Stack Wood In A Traditional Fireplace Fire

We use a fireplace grate when having fires in our living room open fireplace. The fire starter, such as newspaper or firelighters, can be placed either under the grate or at the base of the grate.

It can be beneficial to light a fire starter from under the grate so that the kindling and logs don’t move once the fire starter has burnt through.

When stacking kindling in your fireplace you’ll want to arrange it in a crisscross formation.

The kindling should be laid in such a way that they are all interconnected but still provide enough space between the bits of wood to allow air to flow through.

Here’s how we arrange the kindling in our grate when building a conventional fire.

There’s no secret or perfect way to arranging kindling in a fireplace. As long as the kindling is arranged more or less like the above then you won’t have any problems with your kindling catching alight when you start a fire.

Ensure that you’re not stacking your kindling together in a block, or not spacing the kindling too far apart from each other so that they’re not touching.

When it comes to stacking logs on a fire, you’ll want to follow the same principles as stacking kindling.

The logs will need to be stacked on the kindling, and you should be using your smallest sized logs when building a fire the traditional way. Smaller logs can catch fire more easily than larger sized ones, and it’s also easier to stack multiple smaller logs together in a fire than it is with one or two larger ones.

It’s important that any logs you use are dry and low in moisture content. For more information about what the moisture content of firewood should be and how to check, click here to go to another one of our articles.

In the same way as the kindling was stacked, the logs should be stacked on a fireplace fire so that they’re:

Here’s how we stacked the logs in a recent fire of ours:

You’ll see that the logs are small enough to be able to lean on each other when stacked on top of the kindling.

When lighting this fire using the newspaper at the bottom of the fireplace, the arrangement of both the kindling and logs meant that the fire got going really quickly, and without any problems as a result of lack of air supply or the wood not being able to spread the fire to other bits of wood.

When adding further wood to the fire once the initial bits of wood have burnt through, it’s good practice to place two or more logs at a time on the fire.

By placing more than one log on the fire, the logs can work together to burn more effectively by transferring the heat and flames between each other, and creating turbulence of air around of the logs to keep the airflow going.

The position of these logs doesn’t need as much care and attention as when building a fire. The logs will be able to catch fire much more easily thanks to higher temperatures, but it can be good practice to ensure that they aren’t too far away from each other in a fire.

How To Stack Wood In A Top-Down Fireplace Fire

When following the top-down method of building a fire the same materials as a conventional fire are used, but are added to a fireplace in the reverse order.

The top-down fire method has a number of benefits over a traditionally built fire, including a cleaner burn right from the start and being able to use your largest sized logs when building a fire.

As a result, the way wood is stacked in a top-down method fire differs from that of a typical fireplace fire.

In an upside down fire, the logs are placed first into a fireplace. The logs need to be stacked differently at the base of the fireplace compared to when they are placed on top of kindling in a conventional fire.

For the base layer, stack a row of larger sized logs at the base of the fireplace or grate. The Chimney Safety Institute of America recommends that this layer of logs be placed in a fireplace with the ends facing towards you.

These logs should be packed tightly together horizontally so that the fire can be easily transferred between them when the flames reach this layer.

Another layer of logs should be stacked on top of these logs. This layer should consist of smaller sized logs so that the fire can be more easily transferred to the larger logs.

These logs should also be placed tightly together on a fireplace in a horizontal position.

The kindling that goes on top of these logs should be arranged in crisscross pattern just like in a traditionally built fire.

Your preferred fire starter can then be added on top of the kindling to finish building the fire.

In a top-down method fire, the fire is started at the top and burns down through the kindling and smaller sized logs before burning through the larger logs located at the bottom of the fireplace.

We’ve explained the whole process of starting a fire in a fireplace using the top-down method in much more detail here.

One of the main benefits of building top-down fires in your fireplace is that they can burn for a much longer period of time before further logs need to be added to the fire.

Once a top-down fire does need more wood, adding two or three logs at a time will help to sustain the fire. The fresh logs shouldn’t be too tightly packed or placed too far away from each other inside the fire. You can use a poker or other fireplace tool to help arrange logs in a fire.

How To Get More Heat From Your Fireplace

What Moisture Content Firewood Should Be (And How To Check)

How To Keep A Fire In A Fireplace Going

How To Keep Smoke From Coming Out Of Your Fireplace

How To Increase The Draw On Your Fireplace

Hi, I’m James, I’ve been using traditional open fireplaces and wood burning stoves for many years, and I’ve also recently bought a pellet stove. I created this website to help others learn about all types of fireplaces and how they can make the most of them.