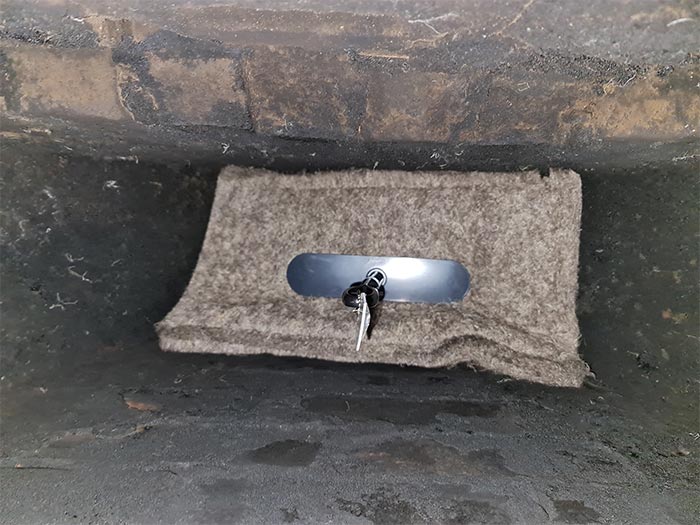 Traditional open fireplaces allow for the free flow of air up the chimney to aid in the removal of waste gases and smoke from a home during every fire.

Open fireplaces don’t have any moving parts, and the process of the natural movement of air up a chimney is known as the draft.

Rising hot air from a fire will start the draft but there won’t be any movement of air up a chimney when a wood burning fireplace isn’t in use, meaning that open fireplaces may let cold air into a home.

So are fireplaces drafty when not in use?

Traditional masonry fireplaces with no damper or form of temporary seal can be drafty when not in use, and a cold draft can be noticeable during the winter months. A closed damper will help to prevent cold drafts, or a draft stopper such as a chimney balloon can be used as a temporary solution to help prevent drafts between fires.

We open fireplaces in both our living room and kitchen, and neither of them have a damper that we can use to help prevent cold air from coming down the chimney.

We’ve had to put something else in our fireplaces to help prevent cold drafts in the winter and so we’ve therefore explained in more detail below:

Traditional open fireplaces provide free passage for air to escape from your home.

The allows hot air generated by a fire to rise up a chimney and pull any smoke and other harmful byproducts also released by a fire out of a house.

Not all open fireplaces will be drafty. Depending on where you live and how your fireplace was designed and built, it may have a form of damper that can be closed to help prevent the loss of warm air or introduction of cooler air into your home.

Dampers are metal plates that can commonly be found within the throat of the chimney, or in some cases at the top of the chimney.

Dampers can be opened during fires to allow smoke and waste gases from a fire to safety leave your fireplace, but also closed to prevent losing heat from your home when the fireplace isn’t in use.

For more information we have a complete guide to dampers here.

However, when a fireplace isn’t in use, it can also lead to cold air from outside coming into a home through the chimney.

We notice that our living room is particularly cold through winter and one of the main causes is that there’s an open fireplace in the room with no form of damper or seal to help prevent a cold draft from entering our home.

Why Is My Fireplace Drafty?

Open fireplaces help to remove byproducts from a fire from your home without any assistance needed from you.

As the hot air generated by a fire rises up the chimney it pulls more air behind it. This continuous process of air moving up a chimney is known as the draft.

While hot air rises, cold air also falls. If there’s no fire and therefore no hot air pushing cooler air up the chimney, then cold air can make its way into your home by falling down the chimney.

As an example, our living room open fireplace has a chimney with no form of damper, seal or doors on the fireplace opening, meaning that during the winter months we can feel the cold air pouring into the room through the fireplace.

Ultimately this means that many open fireplaces can let cold air into your home when not in use because there’s nothing stopping it.

You can however do some things with your open fireplace to help it be less drafty, which we’ve explained below.

How Do I Make My Fireplace Less Drafty?

To help make an open fireplace less drafty, ensure to close the damper in a fireplace between fires. If a fireplace doesn’t have a damper, look to use a form of temporary device such as a draft excluder or a chimney balloon.

In summary there are two main ways to help make your fireplace less drafty:

The damper can be found in many open fireplaces located at the top of the firebox, at the base of the chimney.

There will typically be a metal plate with a handle, and the handle can be used to close the plate shut or used to fully open it. Pulling the handle towards you typically closes the damper, and this will help prevent cold air from coming into your home down the chimney when the fireplace isn’t in use.

If your home has damper located at the top of the chimney (rather than the bottom) then there’ll be a chain and handle located somewhere in the firebox on the side. Simply pulling this chain will open and close the damper.

It’s important that any damper is opened again before having a fire.

If your open fireplace doesn’t have a form of damper (like ours doesn’t) then you can use either of the following to help seal up your chimney and prevent cold drafts:

A chimney balloon can be inserted into the chimney and blown up to help seal your fireplace from the cold air located further up the chimney.

We’ve found that chimney balloons do a pretty good job, but they don’t provide as good of a seal compared to other products.

We like to use a chimney draft excluder known as a Chimney Sheep to help keep our home from being drafty due to our open fireplaces.

This form of draft excluder simply needs to be inserted into your chimney just like a balloon but should provide more of a tight fit if you’ve bought the right size.

Between fires we place our draft excluder up the chimney and it can make a big difference to the temperature of the room.

Just as dampers should always be opened prior to having a fire, you must ensure to remove any chimney balloon or draft excluder before each fire.

You can see which draft excluder we’re currently using and recommend buying here.

Installing a form of wood stove in an existing open fireplace can also help to minimize drafts as it becomes a sealed system and can also generate much more heat compared to open fireplaces because they can be so inefficient.

Due to the nature of how an open fireplace and chimney works, fireplaces can let cold air into a home when not in use.

If your fireplace has a damper you can close it between fires to help prevent cold air from coming into your home through your fireplace, but you must ensure to open the damper again before each fire.

If your fireplace doesn’t have a damper you can use either a chimney balloon or a draft excluder to help stop cold drafts between fires. Again, these must be removed from your fireplace prior to starting every fire.

How To Start The Draft In A Fireplace

The Complete Guide To Using A Fireplace

Why Your Fireplace Smells