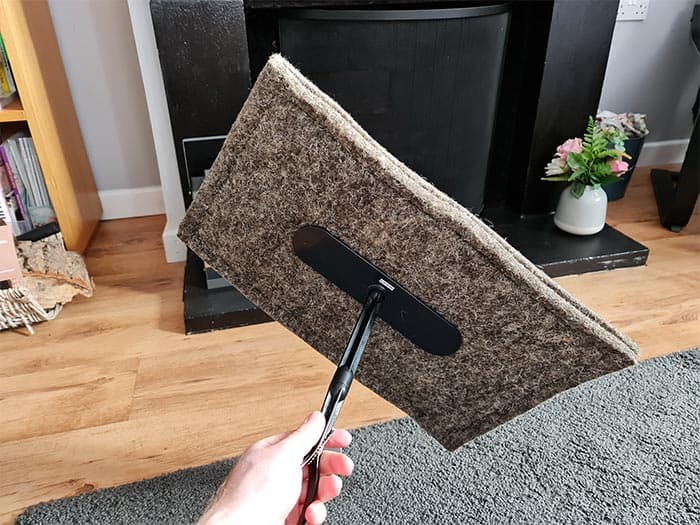 The draft is an important aspect of any fireplace that uses a real flame to generate heat, such as open wood burning fireplaces, gas fireplace and wood burning stoves.

The draft helps to remove any smoke and harmful particulates from a fire from your home by sucking them out through the chimney or flue. If there wasn’t a draft then these byproducts would potentially be entering into your home during fires.

Although the draft can be essential to be able to have fires in your home, a downside is that there can continue to be a draft even when the fireplace isn’t in use.

This can lead to warm air being sucked out of your home and being replaced by colder air from outside, which you’ll feel as a cold draft.

One of the solutions to help keep a cold draft out of your fireplace is using a draft stopper (also known as a fireplace or chimney draft excluder, plug, blocker or cover) to block up the chimney and help prevent the movement of air that is generating these cold drafts.

We’ve therefore put together this complete guide to fireplace draft stoppers to explain:

A draft stopper for your fireplace can make a noticeable difference to the temperature of a room or even your whole house. We’ve definitely noticed that our living room hasn’t been so cold since we started using a draft stopper within our open fireplace.

Why Is There A Draft From My Fireplace?

Traditional open fireplaces with chimneys use a process known as the draft to help remove smoke and other byproducts from a fire to leave your home.

As hot air rises up the chimney from an open fire it creates a vacuum behind it that helps to suck more air up the chimney. This in turn sucks more air into the fireplace from the room, providing a fire with a constant supply of fresh oxygen to keep it going.

This continuous process of moving air helps to keep a fire going in a wood burning fireplace or stove, and no input is required to help make this process work.

A downside of relying on the draft to help keep smoke and other harmful particulates out of your home is that there needs to be an unrestricted passageway for them to leave your home.

Having a chimney can therefore be seen as much like leaving a window open in your home, where air is able to freely move in and out.

This leads to the problem that air can move freely up and down the chimney even when the fireplace isn’t in use. This movement of air can cause:

As this can be a common issue with many homes, there are therefore a number of ways to help block off a chimney between fires so that you’re not feeling a cold draft from the fireplace and not losing warm air from your home at an increased rate.

For more information see our complete guide on how a fireplace works.

How To Stop A Fireplace Draft

In order to help prevent cold drafts from coming down your chimney you’ll need to consider blocking off the fireplace from the chimney.

By blocking off the chimney you can help prevent air from moving through the fireplace, whether it’s losing hot air out of your home or letting colder air into it.

A fireplace draft stopper can come in a range of forms, but its main purpose is to block the movement of air up or down your chimney to help prevent cold drafts.

Certain types of draft stoppers may already be present within your chimney, while for others you’ll need to insert them into the top of your fireplace (where the throat of the chimney is located) in between fires. It’s also important that whatever is used to block off the chimney between fires is removed or opened prior to starting any few fires.

You can also choose to have glass doors fitted to the opening of your traditional fireplace and provide a barrier between the fireplace and the room to help prevent cold drafts.

Installing a wood burning stove in an existing fireplace is also another great way to keep your house warmer because the chimney becomes blocked around the flue when it’s installed.

A damper is a permanent fixture and can be manually opened and closed between fires to help stop a fireplace draft. A damper should be your go-to draft stopper if your fireplace has one.

A chimney balloon is simply a form of balloon that you can blow up within your chimney to provide a tight seal. A chimney balloon can be a good choice if your fireplace doesn’t have a damper.

A chimney draft excluder is another form of plug for your fireplace that is also useful if there’s no form of damper in your chimney. An example of a draft excluder is a Chimney Sheep, which is a pad of sheep wool insulation that can be placed up the chimney between fires to help prevent cold drafts.

We’ve discussed these main ways on how to stop a fireplace draft in more detail below.

One of the best ways to help prevent a cold draft from your open fireplace, as well as from losing heat from your home, is to close the damper.

A damper is an adjustable metal plate commonly found within the throat of the chimney, at the inside top of an open fireplace firebox. A top-sealed damper may also be found at the top of the chimney instead of one located at the bottom.

Fireplace dampers that are located within the firebox will be found with some sort of handle or lever and pulling this handle or lever will typically close the damper shut.

A closed damper will help prevent the movement of hot or cold air up or down the chimney respectively.

The video below shows how a standard chimney damper works.

If you have a top-sealing damper there should be a chain with a handle located to the side of the firebox. Pulling this lever will open and close the damper.

You can also have a damper installed in your home to help stop cold drafts, which will be a more expensive but permanent solution compared to using temporary draft stoppers such as chimney balloons or draft excluders.

For more information on dampers see our complete guide to dampers here.

Be sure to always fully open the damper again prior to starting fires because a closed damper will mean that smoke any other gases will come into your home.

Not all fireplaces will have a damper that you can use to help prevent cold drafts. In fact, our own living room fireplace doesn’t have a damper and so we have to use another form of fireplace draft stopper.

One of the other options for helping to keep a draft out of a fireplace is to use a chimney balloon.

A chimney balloon, as the name suggests, works much like a balloon where you need to blow air into it to blow it up.

You can use a chimney balloon by placing it within the base of your chimney at the top of the open fireplace and blowing it up from below.

Although we don’t currently use a chimney balloon to block off our living room fireplace chimney, we have done so in the past and it did a good job of keeping the heat in our home and the cold air out.

We’ve personally found that a downside to using a chimney balloon is that it doesn’t quite provide a tight seal in the corners of the chimney and so a small amount or cold air still passes through.

Chimney balloons are a great way to seal up the fireplace between fires and prevent cold drafts.

See the range of chimney balloons available to buy here.

You’ll need to size up the internal area of your chimney and choose the right size chimney balloon to provide a good seal.

If your open fireplace doesn’t have a damper and you don’t to use a chimney balloon, another way to help prevent cold drafts from your fireplace is to use a dedicated fireplace draft excluder.

There can be a few different types of draft excluders available to buy, but one of the main and most popular products is known as a Chimney Sheep, which uses a thick of layer of sheep wool to prevent air from getting through once installed.

You simply have to install the handle on the draft excluder and place it up the chimney from inside the fireplace below.

You may need to shine a light up to check that it’s providing a good fit as we’ve found that it can be a bit tricky to get the right fit just by feeling.

The only downside that we’ve found when using our Chimney Sheep draft excluder is that the ends of it can become frayed, but this doesn’t seem to affect the performance of it once it’s up the chimney.

We always ensure to remove our draft excluder from our chimney before starting any fires.

If your fireplace doesn’t have a damper and you’re looking to stop those cold drafts from coming down the chimney then look to use a Chimney Sheep. We’ve found that ours works really well.

You’ll need to measure up the internal flue of your chimney and choose the right size of product accordingly. For our Chimney Sheep we chose one that was slightly bigger so that it provided a tight fit when installed and wouldn’t fall down.

A fireplace draft guard can be a more user-friendly solution compared to having to reach up into the chimney between each fire.

The video below explains what a fireplace guard is and how it works.

You can also choose to make a fireplace draft guard yourself. The video below will give some inspiration on what’s possible.

Between fires, an open fireplace can be much like leaving a window permanently open in your home where a cold draft can be felt continuously through the fireplace.

If your chimney has a damper then in the first instance close the damper between fires to help block cold drafts.

For fireplaces without dampers, temporary draft blockers such as chimney balloons or draft plug excluders can be used to help stop cold drafts, as well as helping to keep warmer air in your home. A fireplace draft guard can also be used in front of the fireplace guard instead of inserting something into the chimney

The best options to use are a chimney balloon that can be bought from here, or using a draft excluder such as a Chimney Sheep, which can be bought here.

Be sure to always open the damper or take out the draft stopper before lighting any new fires.

A Complete Guide To Fireplace Dampers

Why Open Fireplaces Can Be Drafty