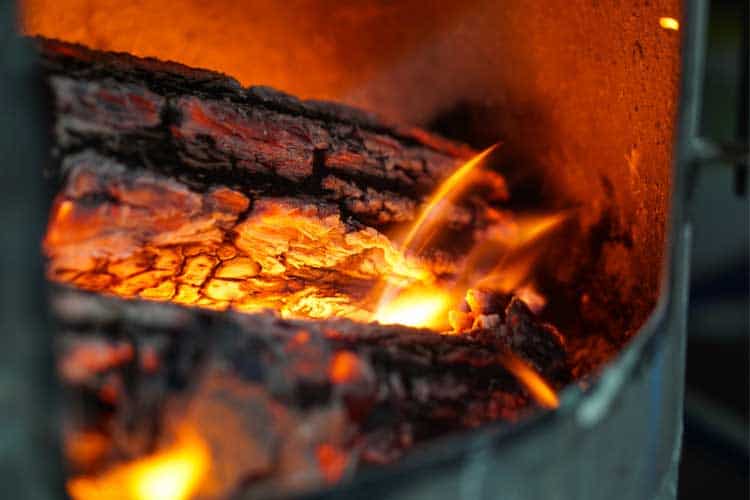 My parents noticed that their wood burning stove started to smoke, both when they were lighting it and when they opened the door to put more logs in, so I did some research into the reasons behind it.

So what causes a wood burning stove to smoke?

The main causes of a wood burner smoking can be:

There are a number of reasons why a wood burning stove can smoke, whether it’s all of the time, intermittently, when lighting the fire or when opening the door to add more logs.

To find out what is causing your wood stove to smoke, you’ll need to go through and eliminate all of the possible causes.

Why Does My Wood Burning Stove Smoke?

When your wood stove is smoking, in the majority of cases it will down to an issue with the flue or the chimney, the logs and the ventilation into the fire, or the draft. An issue with the stove itself is not normally a reason for it to be releasing smoke.

An Un-swept or blocked chimney

A common reason for a smoking wood burning stove is that the chimney hasn’t been swept in a while.

To allow for smoke and other byproducts released by the fire to be exhausted from your home, a chimney is required to draw air up out of the stove through suction.

Chimneys should be cleaned at least once every year and cleaned more often when wood is being burnt in the fireplace. This is because the burning of wood releases soot and small particles then can start to build up on the inside of your chimney, reducing internal size of the chimney and therefore the efficiency of the draft that can be produced.

A draft that isn’t strong enough will prevent any smoke from the fire from being sucked up the chimney and out of your home.

Lighting a match inside your stove will show you how strong the draft is, and the direction of the flame will let you know which way the draft is pulling.

Also be sure to check that the damper is wide open to allow for maximum draft.

It is recommended that only wood with a moisture content of 20% or less is used as firewood.

Wood with a higher moisture content is much less efficient in a fireplace because more energy is required by the fire to burn off the excess moisture. Hardwoods are also preferred over softwoods, such as pine, for reducing smoke.

Furthermore, be sure to only add smaller pieces of wood for lighting and for a short period after the fire has started. Adding larger bits of wood near the beginning for the fire is a common way for the stove to start smoking.

Be sure to keep the vents on your stove wide open after lighting to allow the fire to get up to temperature.

If there is poor ventilation within the room then a lack of oxygen to the fire can prevent it from burning the wood properly, which will cause the fire to start releasing smoke.

If you have a vent to the outside in the room, be sure to keep it wide open to allow fresh air to be sucked into the room and used for the stove. Leaving any door the room or window slightly open will also help with ventilation to the stove.

Another reason why a wood burning stove would smoke can include having a chimney that isn’t tall enough. The longer the chimney the more powerful the draft.

Why Does My Wood Burning Stove Smoke When I Light It?

Sometimes a wood burning stove can produce smoke when lighting the fire.

The main causes of a wood burning stove to start smoking as soon as it has been lit can include:

Cold Air Trapped Within The Stove

Your wood burning stove will be connected to the outside, either by a flue or a chimney. Any colder air from the outside can potentially settle down within the stove and become trapped if the stove door is closed.

Any cold air that has settled within the chimney will push down on the stove and prevent any smoke from escaping. This is especially true if the air and smoke from the stove isn’t hot enough to bypass the colder air in the chimney.

This can be overcome by leaving the stove open for up to 30 minutes before using it, to allow the cold air within the stove and chimney to dissipate and be replaced with room temperature air.

How To Light A Wood Burning Stove to Stop Smoke

– Leave the door of the wood stove open for at least 30 minutes before use to allow any cold air trapped within the chimney to be replaced with warmer air, and to start the draft up the chimney.

– Ensure that there is sufficient draft up out of the stove to prevent the air from stagnating within the stove, potentially causing the fire to smoke.

– Use well-seasoned wood with a moisture content of 20% or less to allow the fire to start and quickly progress. Start with smaller pieces of wood, adding larger logs only when the fire has sufficiently subsided and the stove has reached a higher temperature.

Why Does Smoke Come Out Of My Wood Burning Stove When I Open The Door?

Smoke can come out of a wood burning stove when opening the door to add more logs, so why is that?

The main causes of a smoke coming out of a wood stove when the door is opened are:

The stove door should be cracked open and left for up to 30 seconds to allow for the pressure to equalize between the stove and the room.

The stove door should then be opened as slowly and as carefully as possible, especially if the stove only has only one door, and that the door is large. Opening the door quickly can generate suction greater than that provided by the chimney and pull the air and any smoke into the room.

Waiting For The Flames To Go Down

More flames means more smoke produced. Waiting for the flames to subside before opening the door will help reduce the potential for smoke.

– Open the door slowly to prevent sucking smoke into the room

Why is my new wood stove smoking?

New wood burning stoves will require a couple of uses to cure and burn off any excess paint on the stove, and it can be very normal for a new stove to smoke during this break-in period.

Check the owner’s manual or the manufacturer’s recommendations for your particular model of stove for any mention of smoking during its first uses.

Why is my wood burning stove leaking smoke?

A wood burning stove operating under normal conditions should not be leaking any smoke out into the room.

If the fire has only just been started, leave the stove for a few minutes to allow the fire to get going. This can usually sort out the issue of a stove leaking smoke.