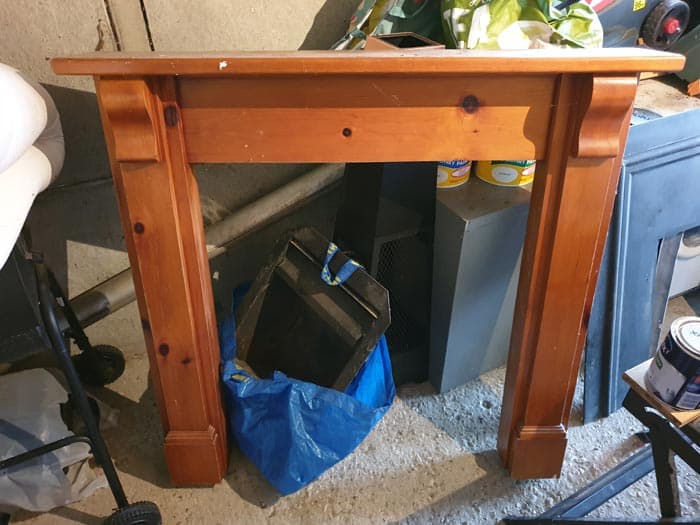 Fireplace surrounds help to turn an open fireplace into more of a decorative feature of a home than simply a functional one.

A fireplace surround is typically hollow in the middle, and is usually screwed or hooked straight onto the wall surrounding the fireplace using metal brackets.

What Is Behind A Fireplace Surround

The area around the opening of a fireplace is called the fireplace surround, and can be made from a number of different materials including wood, stone or metal.

We recently redecorated our kitchen and removed the wooden fireplace surround, as it didn’t quite fit in with the modern design we wanted for the kitchen.

The gas fireplace insert also didn’t work (because it was never connected to the mains) and so that was removed as well.

I took a few photos while redecorating our kitchen, and so I’ve put together this article to share what it looks like behind a fireplace surround (as I wasn’t sure myself what to expect!).

Here’s what the kitchen fireplace looked like when we bought the house:

We finally got around to redoing the kitchen two years after moving in, and it was the last room in the house we had left to decorate.

Here’s what the kitchen fireplace looked like from another angle before the work started:

The fireplace surround was then removed, leaving behind the cast iron fireplace back panel and the gas fireplace insert.

The picture shows how much had fallen down the back of the surround and had got stuck between the fireplace back panel and the wall. Removing the surround also allowed us to remove the wallpaper that we couldn’t previously get to.

The fireplace had been screwed into the wall using metal brackets at the points shown below. The brackets inside the wall had been covered over with filler, which had to be removed in order to unscrew the surround from the wall.

The gas fireplace insert and back panel was removed to leave just the open fireplace and hearth visible.

The timber surround is now currently stored in my garage, as I might decide to paint it and put it back onto the kitchen fireplace along with another type of fireplace insert other than gas, such as an electric fireplace insert.

Here’s what the timber fireplace surround looks like on its own from the front:

And here’s what the timber fireplace surround looks like from behind:

A fireplace surround is typically hollow inside to prevent the manufacturers from using materials that wouldn’t have otherwise been seen, as well as keeping the weight down.

You can also check out what it looks like inside a wood burning stove.

A Complete Guide To Fireplace Surrounds

How To Remove A Fireplace Surround & Mantel