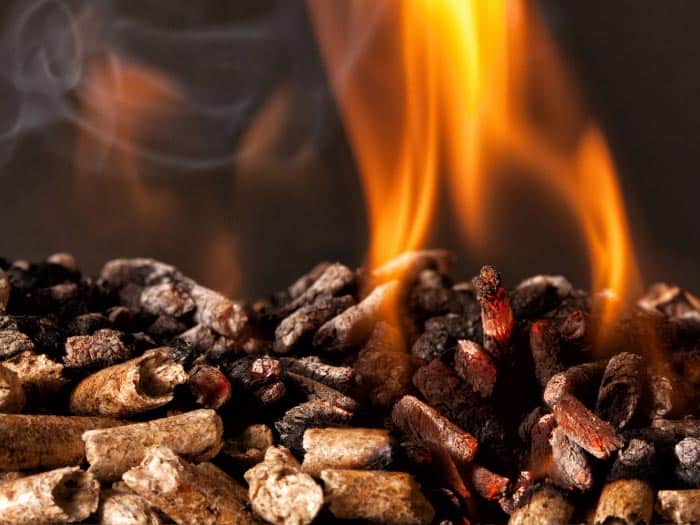 Pellet stoves can be one of the cleanest burning solid fuel appliances thanks to a more automated burning process.

However, many different electrical and mechanical components need to come together within a pellet stove to ensure that this clean burn of the fuel remains constant.

Although wood burning stoves don’t traditionally have any electrical components, a number of problems can be experienced with wood stoves leading to poorly burning fires and smoke being produced, but do pellet stoves also give off smoke?

Pellet stoves typically provide a cleaner burn and therefore produce less smoke compared to other forms of wood stove, but issues such as failure to properly clean and maintain a pellet stove or the use of poor quality pellet fuel can lead to increased smoke production.

We find that our own pellet stove produces less smoke compared to our relatively efficient models of wood burning stove.

We’ve explained in more detail below using our own pellet stove as an example:

Do Pellet Stoves Gives Off Smoke?

Pellet stoves typically produce less smoke than what you would expect with a traditional wood burning stove.

This is mainly because the processes in which the fuel is used, delivered and burnt is far more controlled than what can typically be done with a wood stove.

The reasons why pellets stoves typically give off less smoke than their counterparts can include:

Smoke is a by-product of the solid fuel combustion process that is found in the majority of fireplaces and stoves, apart from electric fireplaces that don’t have real flames and therefore don’t produce any by-products.

A pellet stove is a solid fuel burning appliance, meaning that it uses real flames to combust solid fuel in the form of pellets to produce heat.

One of the potential by-products of burning pellets inside a pellet stove is therefore smoke.

Not all solid fuel burning appliances will produce a lot of smoke. The amount of smoke being generated can vary significantly depending on a number of factors.

The main contributor to more smoke being produced from any form of wood burning fire can be poor combustion of the fuel.

How well fuel is combusted by a fire in a wood burning appliance can be influenced by:

The quality of the fuel can play an important role in how much smoke a wood burning appliance produces.

A fire also needs air in order to combust the fuel.

Wood burning appliances also rely on the draft to help remove waste air from a fire, and in turn suck fresh air in.

Pellet stoves therefore incorporate a number of features to help them to burn the fuel as efficiently and as cleanly as possible to maximize the amount of heat from every piece of fuel and to help minimize the number of emissions and by-products generated, some of which could be in the form of smoke.

The fuel used in pellet stoves, that comes in the form of pellets, typically needs to meet certain standards for its properties.

For example, our pellet stove is required to take Class A1 pellets, which are premium quality pellets used for household appliances such as pellet stoves and have the least amount of ash content and minimal moisture content possible.

For our pellet stoves these pellets should have a maximum moisture content of 8%, which is much lower than the recommended 20% moisture content for firewood used within traditional wood burning stoves.

Pellet stoves therefore help to reduce the amount of smoke being produced compared to other forms of solid fuel burning appliance by typically requiring the use of premium quality fuel.

While traditional wood burning stoves that have no electrical components rely solely on the movement of air up a flue (known as the draft) to help keep a fire burning, pellet stoves use electronic components to help force waste air out of the stove and out through the chimney flue.

A fume extractor within a pellet stove uses an integrated blower to pull waste air out of the combustion chamber and uses sensors and a central control unit to automatically regulate the blower to maintain the optimum level of burning.

For example, our pellet stove has a temperature sensor within the flue outlet which relays information back to the control unit to automatically control and optimize the burning process for efficiency, heat output and reduced emissions.

A pellet stove can therefore use the more automated control of the air leaving the stove to help ensure that minimal wastage such as smoke is being produced.

Pellet stoves are sealed systems and so by controlling the air leaving the stove this in turn controls the amount of fresh air being supplied to the fire.

By sucking air out of the combustion chamber, a vacuum is created which pulls air into the stove through the dedicated air vent.

A pellet stove can therefore help control the airflow to the fire to ensure that it’s receiving enough oxygen, preventing it from struggling and helping to prevent smoke from being produced.

Should You Smell Smoke From A Pellet Stove?

If installed, used correctly and used with the right quality of pellets, pellet stoves should be producing very minimal amounts of smoke by default.

To help keep smoke production from a pellet stove to a minimum:

Do Pellet Stoves Build Up Creosote?

Things To Know About Pellet Stoves?

What’s Inside A Pellet Stove