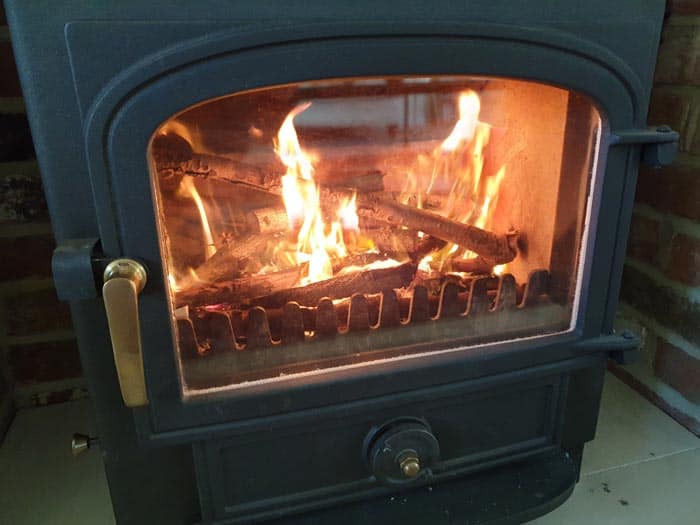 The environmental impacts of burning wood in homes has been at the forefront of discussions in recent years as a result of a crackdown in emissions to help promote cleaner air for our towns and cities.

Wood burning stoves can be one of the solutions to help reduce emissions compared to using traditional open fireplaces for burning wood.

However, burning firewood can still release large amounts of particulates into the atmosphere if a number of factors aren’t take into consideration during fires, but are wood stoves bad for the environment?

Wood burning stoves aren’t necessarily bad for the environment. Although burning firewood to help warm a home can release smoke and other harmful particulates, using a wood stove rather than an open fireplace can significantly cut down on the amount of emissions being released.

Wood stoves are typically much better at burning firewood more efficiently, where less firewood is used, more heat is produced and fewer emissions are released.

However, a wood stove alone can’t help to reduce emissions if it’s not used properly.

The right quality of firewood must also be used, and a stove must be operated correctly in order for burning wood in your home to have the lowest possible impact on the environment.

We’ve discussed in more detail below whether wood stoves are bad for the environment, and explained why a wood stove must be used correctly in order for the potential for a reduction in emissions to be maximized.

We also have two stoves that we’ll use as examples to explain whether or not wood burning stoves are environmentally friendly.

Burning wood may not always be as harmful as burning other sources of fuel but if firewood is burnt incorrectly, or if the wood is insufficient for burning, then smoke and other harmful particulates can still be released into the atmosphere in high quantities.

Firewood has traditionally been burnt in homes within open fireplaces.

Traditional open fireplaces have a number of flaws in their design that means that firewood can’t be burnt very efficiently, and emissions can be high.

The Environmental Protection Agency explains that traditional open fireplaces can potentially be lower than 10% efficient, as much of the heat is lost up the chimney rather than being used to heat a home.

These flaws in open wood burning fireplaces include the inability to:

Environmental factors and policy have pushed the burning of firewood in homes to be more efficient and produce fewer emissions, and as a result be less harmful to the environment.

Wood burning stoves are designed to help resolve the issues and increase the efficiency of burning firewood so that burning wood isn’t as bad for the environment.

We have a number of stoves in the family, and one was installed inside an existing open fireplace while another came pre-installed when the house was bought as new.

Our multi fuel stove (which is the Clearview Vision 500) was installed in a living room fireplace to help increase the heat output from burning firewood.

Stoves are commonly installed in existing open fireplaces (which we’ve discussed in more detail here) to help increase the efficiency of burning wood.

An increased efficiency in burning firewood using a wood stove can mean:

While open fireplaces can be as little as 10% efficient, our stoves have official efficiency ratings of between 70 and 80%.

The higher the efficiency of a stove, the better the firewood can be combusted, fewer emissions can be released and the better overall a stove can be for the environment.

We explained earlier why burning firewood in open fireplaces can be so inefficient, and this includes the inability to control both the air coming into the fireplace and control what’s leaving up the chimney.

Wood stoves have a number of features that helps them make burning wood better for the environment.

These environmentally friendly designs include:

Wood stoves incorporate one or more air vents that can be used to fully control how much air is getting to the fire.

If too much air is being supplied to the fire it can be burning through the firewood too quickly to be efficient. A faster and hotter burning fires isn’t necessarily good because the firewood can be consumed at a much faster rate to make it an efficient heat source.

By being able to close down the air vents on a wood stove you can restrict the amount of air getting to the fire and therefore slow down how quickly the firewood is being combusted, while still being able to generate large amounts of heat.

A wood stove can therefore be considered to be better for the environment because less firewood can be used for each fire.

Stoves also used baffle plates to help restrict the rate at which waste gases from initial combustion of the wood leave the stove, by forcing them through a smaller gap.

Much of the heat that can be produced from burning firewood can be through combustion of the waste gases.

Combustion of waste gases isn’t easily achievable with open fireplaces, but wood stoves create an environment where higher temperatures and pressures of the firebox allow the combustion of these gases through a process known as secondary combustion.

Wood stoves can also therefore be considered better for the environment because more heat is being extracted from every piece of firewood and fewer emissions are being produced as a result.

For more information we have a complete guide on how wood burning stoves work.

The Environmental Protection Agency (EPA) overlooks the safety and efficiency of wood stoves in the US, while in the UK it’s overseen by DEFRA.

Both governing bodies have their own list of approved stoves, where each stove is tested to confirm how clean burning and efficient they are.

In the UK, if you’re looking to use a stove in a Smoke Control Area (which is most large towns and cities) you’ll need to purchase a DEFRA approved stove. DEFRA approved stoves have passed emissions tests and are the cleanest burning stoves available.

You can find the list of all of the DEFRA approved stoves here.

Our stoves are DEFRA approved but we don’t live in Smoke Control Areas.

If we were to live in one of these areas then our stoves would need an additional component that prevents the air vents from being fully closed down.

By always allowing at least a small amount of air into a wood burning stove it can help to prevent fires from smoldering and producing smoke, which is good for the environment as there will be less smoke and other harmful particulates being released into the local atmosphere.

However, buying EPA or DEFRA approved stoves, whether you live in Smoke Control Areas or not, means that you’ll be using a stove that is within the list of stoves that can be the least harmful to the environment.

In order for a wood stove to be considered good for the environment then a stove must be used correctly to allow firewood to be burnt as cleanly as possible to help reduce emissions.

A wood stove should be operated so that the fire isn’t burning too slowly or quickly:

Wood stoves have nominal heat outputs and the right size of heat output on a stove must be matched to the size of the area it needs to heat.

If a stove is too small for the room then there can be a tendency to ‘over fire’ the stove in order to try and produce enough heat to warm the room.

If too much fuel and air is being supplied then the fire can be burning too fast and hot for the stove to be efficient. Continuous use of a stove over its design limits may lead to permanent damage of the stove over time through over firing.

On the other hand, if there’s too little wood on the fire or too little air is being allowed into the stove then the fire can be struggling to combust the wood properly, leading to more smoke being produced and a stove that is more harmful to the environment.

We’ve explained in more detail what a fire in a wood stove should look like here.

A wood burning stove therefore needs to be operated efficiently in order for it to be as good for the environment as designed.

The Right Quality Of Firewood

The type of firewood being used must also be of sufficient quality for the use of a wood stove to not be bad for the environment.

Using wood that is too wet for use as firewood can lead to a struggling fire that can be releasing more smoke and harmful particulates into the atmosphere due to incomplete combustion of wood.

In order for a wood stove to have a low environmental impact only properly seasoned or kiln dried wood should be used.

Properly seasoned firewood will have a moisture content of below 20%.

You can use a moisture meter to check the moisture content of your firewood.

A moisture meter is a highly essential piece of kit for your fireplace or stove and we use ours every time we have a fire.

You can find our recommended moisture meter right here.

For more information about seasoned firewood see our in-depth guide.

Are Wood Stoves Good For the Environment?

The positive environmental impact of wood burning stoves is that newer models of wood stove can be much better for the environment compared to older versions of stoves, or open wood burning fireplaces.

Modern wood stoves incorporate a number of design features that helps firewood to be burnt more efficiently with reduced emissions.

However, in order for a stove to work as efficiently (and be as good for the environment) as possible, a stove must be properly used to help prevent smoldering fires or fires that are burning too fiercely.

The right quality of firewood should also be used in order for emissions of smoke and other harmful particulates to be kept to a minimum. Only properly seasoned or kiln dried firewood should be burnt in wood stoves.

Are Wood Burning Stoves Worth It?

How Long Do Wood Stoves Last?

How To Efficiently Use A Wood Stove

What Moisture Content Firewood Should Be (And How To Check)