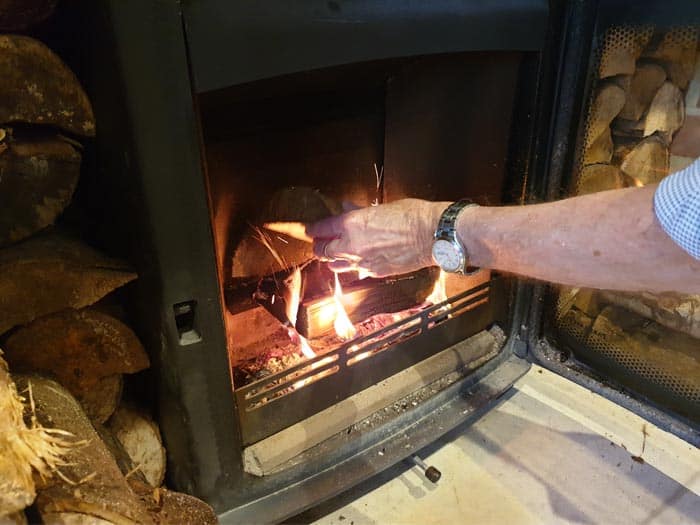 Wood burning stoves help to deliver a great fireplace experience and can generate great amounts of heat for home.

Electric fireplaces are also becoming a popular way to heat a home thanks to their relatively low cost to buy, ease of use and ability to use electricity to generate heat. Electric fireplaces can also come in the form of a wood stove to imitate the look and feel of a real wood burning stove.

When it comes to costs, a wood stove can be a more expensive upfront purchase compared to an electric fireplace, but in many instances firewood can be a more cost effective source of fuel.

So is a wood stove cheaper than electric?

Studies have shown that burning firewood can be more cost effective than using electricity in terms of the price per amount of heat produced. However, fuel costs will vary between regions and a modern, highly efficient stove will be much more cost effective in the long run compared to older models.

Whether a wood stove is cheaper than electric needs to be compared by looking at the overall costs throughout the lifespan of each unit.

We have both a real wood burning stove and an electric stove and so we’ve explained in more detail below the cost differences between the two.

Is A Wood Stove Cheaper Than Electric?

Wood burning stoves are appliances that you can install in your home in order to burn firewood to generate heat, while also being able to enjoy the experience of real fire.

Wood stoves don’t require a source of electricity in order to work, but some models of stove can have an integrated blower to help disperse heat around a home, in which an electrical supply would typically be required.

We have a number of stoves in the family, two of which are shown below, and don’t need an electrical supply:

Pellet stoves, which differ from wood stoves because they use pellets as their source of fuel, typically do require a source of electricity in order to work. The electricity is used to help feed the pellets into the stove, but a pellet stove still has a real fire like a wood burning stove.

Electric fireplaces do require a source of electricity in order to operate.

Electric fireplaces, like our electric stove shown below, don’t have a real fire but use electricity to generate the look of flames through lights, and generate heat through use of an integrated conventional space heater.

While wood burning stoves, pellet stoves and electric stoves all generate heat and a fireplace experience; the difference lies in the type of fuel used.

The cost of the firewood, pellets and electricity will be different, and will also differ between every region.

Whether a wood stove is cheaper than electric will depend on a number of factors, but the cost of the fuel will play an integral role.

Pennsylvania State University (PSU) conducted a study on the cost of wood versus other types of fuel, including electricity, for the previous 20 years.

The study showed that cordwood had been the least expensive type of fuel throughout the period, with electric being the most expensive.

The prices were for just the Pennsylvania state and PSU noted that their study might not be accurate for other regions.

There are a number of factors that influence whether a wood stove is cheaper than electric, and we’ve outlined the main costs for both types of fireplace below.

When compared to electric, the main costs of using a wood burning stove to heat a home include:

In comparison to wood stoves, costs associated with using electric fireplaces include:

A wood stove can be more expensive to purchase compared to an electric one, but studies have shown that the cost of firewood can be cheaper compared to electric in terms of heat produced.

How Long Do Wood Stoves Last?

Does A Wood Stove Save Money?

Does A Wood Burning Stove Add Value To A Home?

Is A Wood Burning Stove Worth It?